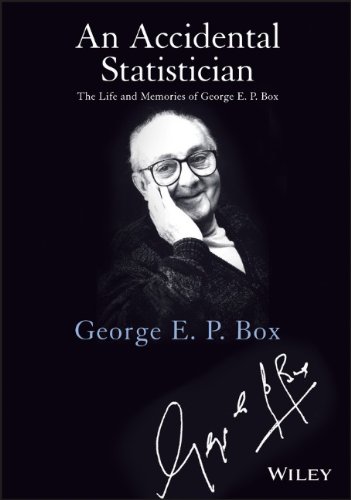 I just finished reading An Accidental Statistician: The Life and Memories of George E. P. Box. The book reads like he is recounting his memories (it is aptly named) rather than as a biography. I enjoyed the stories and vignettes of his work and his intersections with other statisticians. The book also included pictures of many famous statisticians (George’s friends and family—Fisher was his father-in-law for a bit) in social situations. My favorite was the picture of Dr. Frank Wilcoxon on his motorcycle (see below).

There were some very interesting and funny anecdotes. For example, when George recounted a trip to Israel, he was told to get to the airport very early because of the intense security measures. After standing in a non-moving line for several hours, he apparently quipped that he had never before physically seen a stationary process.

My favorite sections of the book were the stories he told of writing Statistics for Experimenters, his book—along with William (Bill) Hunter and Stu Hunter—on experimental design. He wrote about how the book evolved from mimeographed notes for a course he had taught to the published version. It took several years for them to finish the writing of the book, only to be met with horrible reviews. (Note: This makes me feel slightly better about the year it took to write our book.)

In a chapter written about Bill Hunter (who was one of George’s graduate students at the University of Wisconsin), George relates that Bill started his PhD in 1960. After he finished (in 1963!)  he was hired almost immediately by Wisconsin as an assistant professor. Three years later he was made associate professor, and in 1969 (eight years after he started his PhD) he was made full professor. Unbelievable!