On Sunday morning I came across a tweet by NPR’s Lulu Garcia-Navarro morning asking people when they knew things were going to be different due to COVID.

We all have #TheMoment when we knew things were going to be different. Where were you and what were you thinking a year ago? We are one year into this pandemic. Tell us @NPR @NPRWeekend

Whenever I read replies to a tweet like this I’m always tempted to scrape all the replies and take a look at the data to see if anything interesting emerges. So I go ahead and load the awesome rtweet package and then I remember that the task of getting all replies to a tweet is not super straightforward – there is even an open issue about this on the package repo. I feel like over the years I’ve seen more than one write up about solving this problem, and one that came to mind was Jenny Bryan’s, which you can find here. But this solution uses the twitteR package which predates rtweet and hasn’t been updated for a while. It looked like it should be possible to update the code to use rtweet, but I had limited time on a weekend with family responsibilities, so I decided to take the short cut.

Let’s start by loading all the packages I’ll use for this mini analysis:

First, I took a look at the original tweet. The text of the tweet is stored in the text column of the result – I’ll refer to the text column repeatedly throughout this post.

I set the number of tweets to download (n) to 18000, which is the maximum allowed, though based on the engagement on the original tweet, I didn’t expect there would be that many replies.

Note that this code isn’t running in real time, so these are replies as of around 10am GMT on the morning of Monday, 1 March. There are 7572 replies in the result.

Based on a bit of interactive investigation of the data, I decided to do some data cleaning before analysing it further.

Using the tidytext package, I took a look at the most common words in the replies, excluding any stop words.

This result isn’t super interesting, but it looks like for most people their “moment” was in March and I was surprised to see February ranked as low as 25th in the list of common words.

Next I explored common bigrams, which took a bit more fiddling. I am not aware of a predefined list of stop words for bigrams, so I decided to exclude any bigrams where both words are stop words, e.g. “in the”. I also excluded the bigram “https t.co”, which contains URL fragments.

After the initial exploration of common words and bigrams I decided that interesting feature of these data might be the dates mentioned in the tweets. After interactively filtering for various months in the RStudio data viewer to see what sorts of results I get, I decided to focus on bigrams that include the months December through May. And I used readr::parse_number() to do the heavy lifting of extracting numbers from the bigrams.

Let’s take a look at which dates were most commonly mentioned.

As expected based on previous results, I see lots of March dates, but March 13 seems to really stand out. 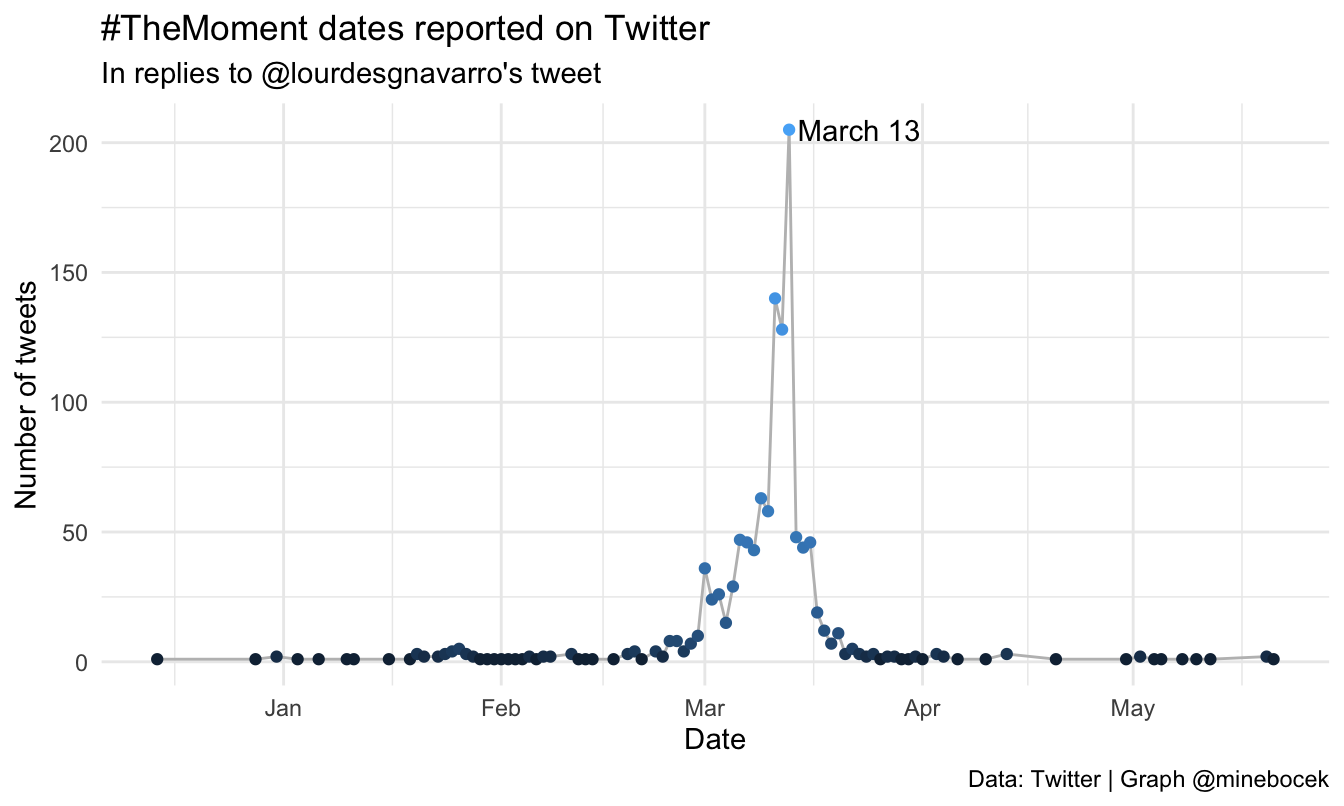 I’d like to first acknowledge that March 13, 2020 is an incredibly sad day in history, the day Breonna Taylor was fatally shot in her apartment. I encourage you to read the powerful statement by Black Lives Matter Global Network Foundation in response to Grand Jury verdict in the Breonna Taylor case.

I wanted to see why this date stood out in the replies. This is an opportunity to fix a simplifying assumption I made earlier as well. Some dates are spelled out as “March 13” or “13 March” in the tweets, but some are written as “3/13” or “3-13” or “Mar 13” and various versions of these.

I can now go back to the tweets and filter them for any of these text strings to get all mentions of this date.

There are 295 such tweets, which is more than what’s shown in the earlier visualisation.

To get a sense of what’s in these tweets, I can again take a look at common words in them. But first, I’ll remove the text strings I searched for, since they will obviously be very common.

It’s not straightforward to get anything meaningful from this output. I think the “3” comes from mentioning other dates in March (e.g. “3/12”), “2020” is the year and doesn’t tell us anything additional in this context, and “amp” is “&” when tokenized. So I’ll remove these.

I’m not a huge fan of wordclouds but I think it might be a helpful visualisation here, so I’ll give that a try. 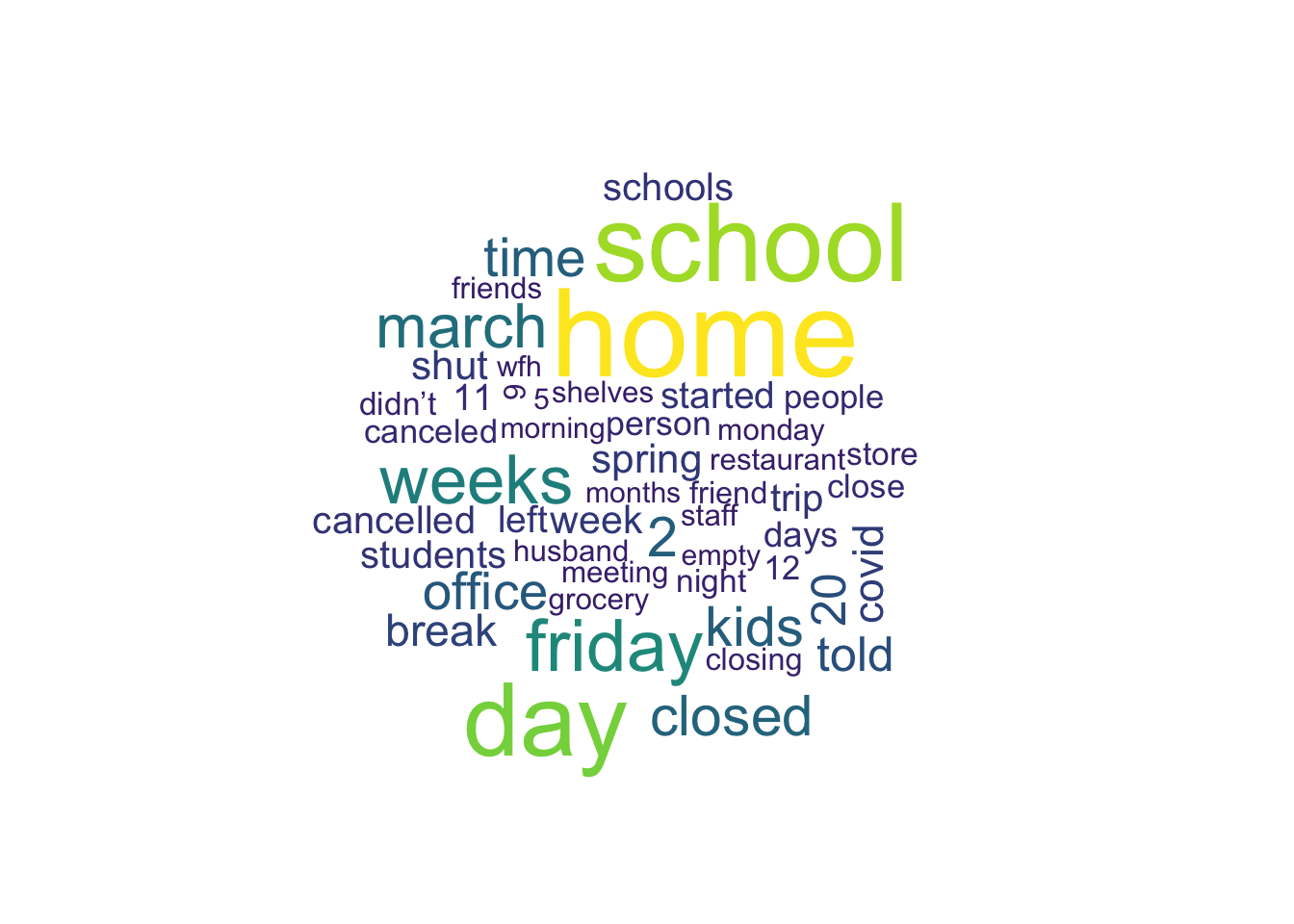 As I was perusing the data throughout this analysis, mentions of Tom Hanks and NBA seemed quite frequent. This was surprising to be since the NBA is rarely on my radar (and less so now that I’m in the UK) and I was not expecting the Tom Hanks celebrity effect! Another phrase that stood out was spring break, which is not too unexpected.

Let’s take a look at how many tweets mention these, out of the 5969 total.

Perhaps the most unexpected thing about the results of this analysis is how clearly March 13 stands out as a date people mentioned. The other surprising result was people mentioning dates as late as end of May!

There are certainly some holes in this analysis. Text strings I used (both for capturing replies to the original tweet and for including/excluding tweets from the analysis) as well as my regular expressions could be more robust. Additionally, relying on readr::parse_number() solely to get dates is likely not bullet proof.

Dipping my toes in generative art, with my sister

Story of my first attempt at learning how to make generative art in R.